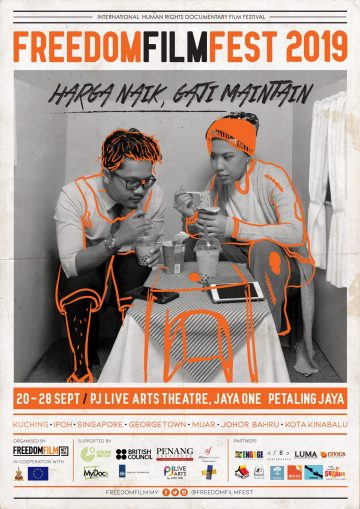 FFF2019 highlights that the UN Declaration on Human Rights declares that “Everyone has the right to a standard of living adequate for the health and well-being of [themselves] and of [their] family, including food, clothing, housing and medical care.”

But despite that, many of us are struggling to provide for ourselves. Issues such as the rising cost of living, the ever increasing price of food and petrol, the struggle to finance housing and pay for healthcare and stagnant wages are serious issues facing Malaysians and the international community alike.

Here are some of our highlights:

It’s a beautiful thing when art inspires other artists.

FayFay, an aspiring Portrait Artist, specializing in portrait painting, was part of our first ever art battle inspired by the films featured at the festival. This community of Malaysian artist, were given 30 minutes to live paint in front of a live audience as part of our festival activities.

The festival opened with PUSH, a feature documentary film by Fredrik Gertten on housing as a fundamental human rights.

Fredrik was at the festival to present his film and to take questions from the audience after the film. It was a full house screening and attendees included then Deputy Minister of Housing and Local Government, Raja Kamarul Bahrin.

An extended forum entitled, Pushing back on affordable homes in the city – What can our local govt do? was held after the screening with Fredrik, MP of Petaling Jaya Puan Maria Chin and Deputy Director of Research from Khazanah Research Institute, Chris Choong

Together with Pit Stop, we had a multimedia workshop using photography and video, adopts a different perspective by inviting kitchen soup volunteers, artists and young filmmakers to converse with the homeless people, and collaboratively produce short multimedia narratives.

We went on a roadshow across Malaysia

Aside from the screenings at Petaling Jaya, our festival travelled to Muar, Johor Bahru, Temerloh, George Town, Ipoh, Kota Kinabalu, Kuching and Miri.

Films Screened at this edition

The life of an Iban indigenous man from the interiors of Sarawak, and his search for employment in the city, as told by Tony to filmmaker Albert Bansa.

How far does RM70 go? Meet a family who can't afford that sum for their electricity bill. Filmed in low-cost housing in Kuala Lumpur, Malaysia.

Three hospital cleaners fight for fair wages in When We Are One (Bila Kami Bersatu), a rare insight into the lives of working-class women in Malaysia.

When We Are One